The old joke that Unitarians believe in "one God at most" lives again in the paucity of resources we develop, projects we plan or visions we tolerate. Today, it's "one idea at most" -- and they're rarely new.

One option at most for anything with Unitarian Universalism, even though our ancestors both on the Unitarian and Universalist sides were able to produce a variety of hymnals and different worship resources for differing churchmanships and congregation size, and with fewer people and at higher cost. We even had hymnals for church schools and social groups. Imagine what they would do with word processors and an on-demand book publisher like Lulu.com. The difference is will.

For years but particularly recently, I've been trying to figure out what would have been the trajectory of Unitarian (and) Universalist hymnody if it had not gone down a path lain down by Kenneth Patton, the influential editor of the "old blue" Hymns for the Celebration of Life. One practical reason is that such a hymnal might work better for Christian Unitarian Universalists.

And recently, I was in Massachusetts for friend, minister and blogger Victoria Weinstein's installation, and spent a day researching at Harvard Divinity's archives: I have and shall report out from those discoveries. But the library closed long before my train left Boston, so I went to the Harvard Co-Op to right a wrong. I had to buy the fourth edition (2007) of the Harvard University Hymn Book. I had opted against it the last time I was there.

When I came home, I started using old directories for background research, and look what I found. From the 1892 Year Book. 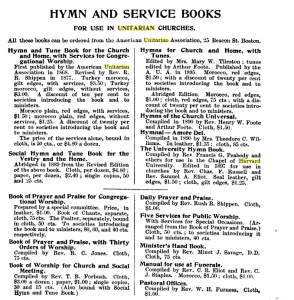 The Harvard University hymnal was once considered a suitable hymnal for Unitarian churches. "Of course it was," I mused.

And the more I look at it, I see the new edition would work in a liberal Christian church, including a Unitarian (or) Universalist one, the name notwithstanding. But here are a few (and hardly exhaustive) things I like about it, both serious and frivolous:

This site uses Akismet to reduce spam. Learn how your comment data is processed.