I hate to see any bookstore die, even a chain store like Borders that caused other bookstores to fail. (For the record, I'd first learned of Borders from a Unitarian Universalist seminarian ages ago; her husband worked for them.) One of three stores has already closed in the District of Columbia -- that's when this idea was first born -- but now we're losing our other two, and scores more are closing across the country. 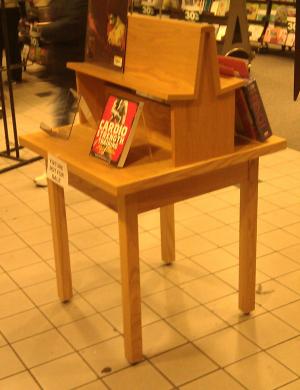 I went by one today; the line of bargain-hunters was so long that I didn't bother to buy the handful of computer books I had selected. But again my eye turned to the display pieces. As you see from the photo, they're not for sale -- yet. But I think a creative if cash-poor church could use this. This idea will take a bit of imagination, so follow me here.

This is made of two pieces: a square table and a double-faced book stand. Imagine the book stand pushed to the edge of the table. Put your sermon manuscript -- perhaps in a three-ring binder -- on the bookstand. On the other side, place an open Bible -- or that membership book so many people love. In front of it can go flowers. Am I suggesting turning this bookstore display piece into a pulpit. Yes, I am. (It's a little low for me, but I'm pretty tall. I could cope with it, and have preached from shorter.)

Version two. There are also longer tables for sale, with the shorter end the same width as these square tables. Again, keep the book stand in the "pulpit" position, leaving the rest of the table like a thrust stage towards the congregation. Put the communion ware, or a basin for a baptism, on it. Or what have you. Candles?

Or alternately, turn the book stand 90 degrees so its length runs the length of the longer table. Place matching copies of the communion liturgy on either side, and welcome communicants to the table after the end of the main service. (Having communion after the main service was once a common, since it's never been terribly popular in Unitarian and perhaps Universalist circles, and gathering up a communing rump-congregation dates to Elizabethan England. And not a bad way to negotiate its resumption in non-Christian UU churches today, I think.) Other services can likewise be held 'round the table, if the congregation is small enough and the service is short enough for people to stand.

Or, say in a very small ("one room") congregation, remove the pulpit piece -- it could use its own shelf in this case -- and serve refreshments from it after the service. Or use it at other times as a work surface. Board meeting?